Bullock Harbour Preservation Association is campaigning to halt development by Bartra Property Capital Group at Bullock Harbour.  The association is keen to see the site, formerly occupied by Western Marine (see main photo), developed in a safe and sustainable way that respects and promotes the maritime and historical context of the harbour, continues and increases the commercial and community uses, and takes account of both the tidal and overtopping flooding to which the site is subject.  However the Bartra plans fail on all accounts. Our article below details the planning history of the site and the decisions which led to the pursuit of a Judicial Review against An Bord Pleanala by BHPA.

The site in question, immediately adjacent to the harbour, was acquired by the Bartra Property Capital Group for the development of luxury houses and apartments, with some marginal provision of commercial / community units. The planning history is this:

Through this website – watch out for our news posts –  Bulloch Harbour Preservation Association (BHPA) has provided information on the planning applications, on the detail of the proposals, on how to lodge “observations” with the planning authority or ABP and on action being taken to ensure that the character, heritage and working use of the harbour and the immediate area of Bulloch are preserved for the benefit of users, local people and the many visitors who enjoy this maritime amenity.   You can support our campaign and the general work of the association in many ways, including financially:  see our bank information scrolling down here.

Information on the planning application

Bartra’s second planning application for the Western Marine site at Bullock Harbour (see below) was refused by Dun Laoghaire Rathdown County Council in February of 2018. The application and “observations” by interested individuals and organisations, the refusal by DLRCoCo and Bartra’s appeal to An Bord Pleanala are on the DLR planning site  online under the original application reference Ref D17A/1135.

Bulloch Harbour Preservation Association objected to the planning application and supported DLR’s refusal of planning permission in our submission to An Bord Pleanala in 2018.  The points that we and our supporters made to these public bodies included:

The current planning application is for three large (400+ sq m) “houses”, comprising three stories plus effectively a fourth floor with roof garden and structures to the rear of the site.  And a structure at the end of the quay with two very big (160 sqm) apartments over a commercial unit (cafe).  Both of these structures are planned to be taller than the highest building at the harbour which is the DLR pumping station that you can see to the right of the image below.  A boat building workshop and tiny community units are planned but little detail is provided on how these could operate. Further comments on multiple aspects of the planning application are provided in our news posts.  In the image below, we have inked in the developer’s representation of the development as the original drawings, we believe, failed to show the true impact of the size and height of their buildings.

Prior to this planning application, the Western Marine site, which comprises boatsheds and other industrial uses, was sold to Bartra who then submitted their first planning application  in December 2016.  This raised a furore of protest on multiple grounds.  Hundreds of “observations” were lodged with the planning authority, Dun Laoghaire Rathdown County Council who turned down the application in record time.  Their lengthy rejection is available to read here.

The first planning application was dominated by luxury residential but dubbed by the press “Costa del Sol”.  We had to produce our own image – see below – as the developer’s images were carefully angled to avoid sight of the three large structures to the rear. 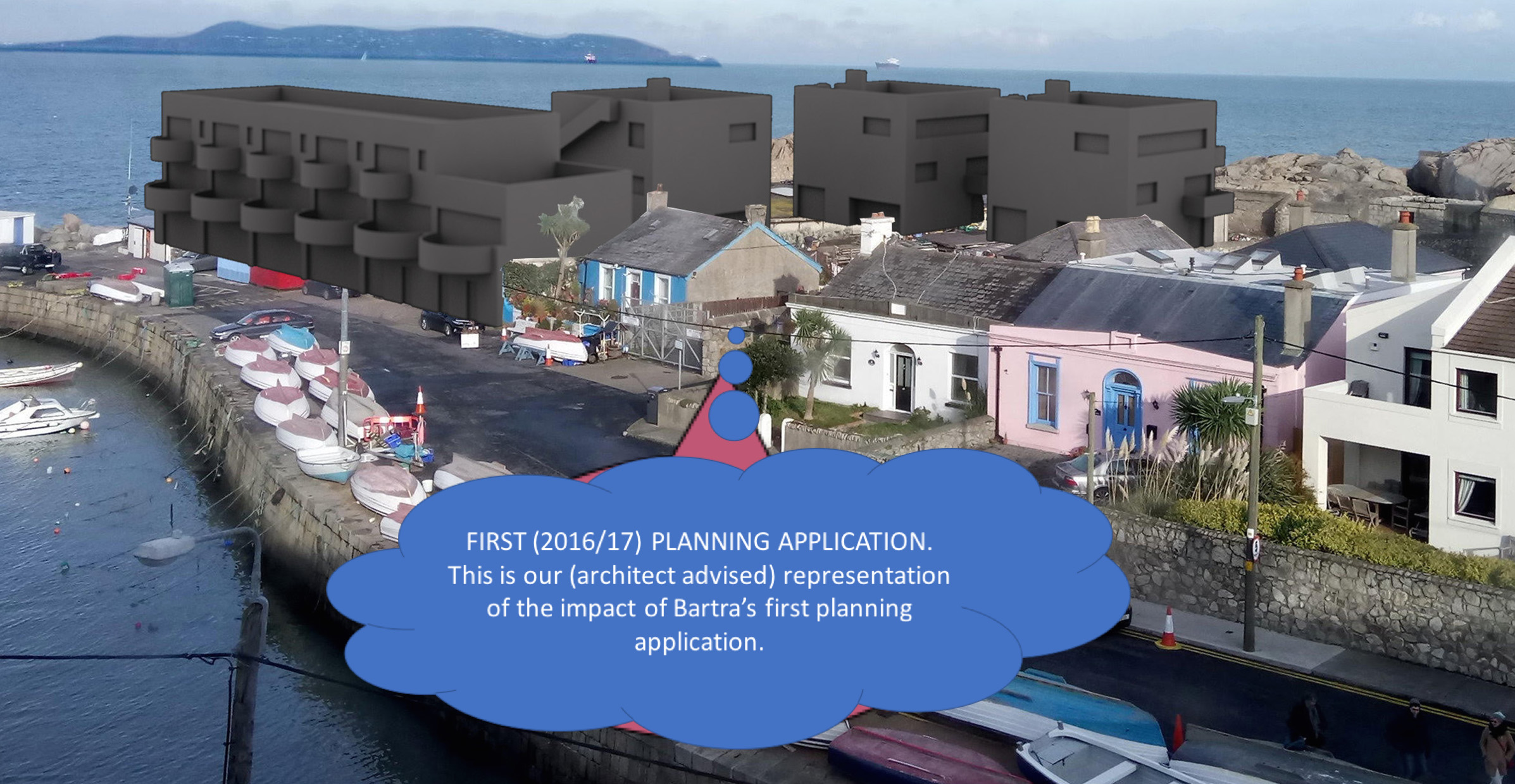 Your group for posting news, views, pics and memories of Bulloch Harbour